Many different reasons played their part in the fact that the tradition of the Warsaw School of the History of Ideas was abandoned. In the Polish context the most important reason was obviously the political one. Forced mass emigration after the March events in 1968, leading to the dispersion of many distinguished members of the Warsaw School around the globe, and the repression of the freedom of speech in the conjunction with a change of the intellectual atmosphere in Poland – those two factors primarily contributed to the academic discontinuation and rendered impossible to develop and advance the very idea of the School. Single thinkers may still have been working and publishing in the spirit of the School but their efforts have to be recognized as isolated. Moreover, after the 1989 this current of thought sank in even deeper oblivion as both an aftermath and part of natural and understandable gesture of severance from the troublesome legacy of the previous political system.

The said oblivion may have yet another cause: intellectual change in the Western thought that transpired in the second half of the 20th century. Linguistic turn in philosophy and concurrently a veritable eruption of structuralism and poststructuralism played their part in rejection and suppression of the historical paradigm, nowadays often referred to as „historicist”.

Precisely today is the right moment to bring out of the shadows the legacy of the School. There are many ponderable historical reasons for its revival – for example, we may still talk with many of the School’s living members – but above all there is an intellectual demand for it, for it seems that we have reached the necessary distance which enables us to investigate the history of thought in 20th century. That epoch is sufficiently remote to us so we can engage in a fruitful discussion with it. Taking into account the lessons of those currents of thought which were critical towards historical paradigm, we should nevertheless retrieve the output of the School and incorporate it into our way of thinking. Such demand is even more urgent in view of the fact that the beginning of the 21st century disproved the „end of history” claims; history sped up and for the contemporary thinkers it represents both a challenge and an obligation to understand this sudden acceleration.

For the Polish intellectuals winning back the legacy of the Warsaw School of Ideas should be even more important. The School represents an original and unique Polish contribution to the intellectual disputes that took place in the West in the last half-century. Fruitful discussion with the achievements of the School may become a starting point for elaborating a common and truly original Polish stance in the most important contemporary debates in humanities, for the School remains a vital element of our national heritage in the sphere of ideas.

(1919–2009)
Philosopher and historian of philosophy, professor of IFiS PAN. She studied philosophy at the Stefan Batory University in Vilnius. During the II World War she served as a liaison officer in AK. She was arrested by Russians in 1944 and sentenced for 11 years of Soviet forced labour camp. Shortly upon her releasement she received a writ commanding her to resettle immediately to kolkhoz. She returned to Poland in 1955. Editor–in-chief of the „Archive of the History of Philosophy and Social Thought” from 1982 to 1986. Major publications: Narodziny pozytywizmu polskiego 1831–1864 (1964); Kłopoty intelektu. Między Comte᾽em a Bergsonem (1975); Przeszłość i interpretacje (1987); Ślad i obecność (2002); Kwintet metafizyczny (2005) and memoirs Po wyzwoleniu 1944–1956 (1985).

(born in 1934)
Philosopher, historian, essayist. He graduated from the Polish studies at the University of Warsaw. In 1968 due to political repressions expelled from the University of Warsaw, since 1972 he resided in France. Honoured with the Commander’s Cross with Star. He authored (inter alia): Człowiek pośród rzeczy: szkice historycznofilozoficzne (1973); Europa i jej narody (1992); Zbieracze i osobliwości: Paryż – Wenecja XVI–XVIII wiek (1996); Historia – nauka wobec pamięci (2006).

(1921–2002)
One of the founders of the „Archive” and long-term Journal secretary. Historian of philosophy and ideas, professor at the Institute of Philosophy and Sociology PAN. He specialized in the history of German philosophy, translated into Polish major work of Arthur Schopenhauer The World as Will and Representation. Other major publications: Rozdroża pesymizmu. Jednostka i społeczeństwo w koncepcji Artura Schopenhauera (1965); Między marzeniem a wiedzą. Początki myśli socjalistycznej w Niemczech (1975); Schopenhauer (2000).

(born in 1939)
Professor of philosophy, former Editor-In-Chief of the “Archive” (2003–2009), for many years performed directorial duties in the Department of the Modern and Contemporary Philosophy at the Institute of Sociology and Philosophy PAN. Specialist in the field of Polish philosophy of the 19th and 20th century (particularly in its connection with French and German thought) and history of the modern philosophy. Major works: Poglądy filozoficzne Henryka Struvego (1974); Bergson a przemiany światopoglądowe w Polsce (1984); Panorama polskiej myśli filozoficznej (1993); Przeszłość dla przyszłości (2003).

(born in 1933)
professor of philosophy, interested in the history of philosophy and philosophy of culture, professor emeritus at the Institute of Philosophy and Sociology PAN. Editor-in-chief of the „Archive” from 1987 to 1993, now member of the Advisory Board. Fellow at the Polish Academy of Arts and Sciences and Warsaw Scientific Society, member of the Society for the Advancement and Promotion of Science. Major works: Marcin Czechowic (1532-1613): studium z dziejów antytrynitaryzmu polskiego XVI wieku (1964); W kręgu myślicieli heretyckich (1972); Nonkonformiści religijni XVI i XVII wieku: studia i szkice (1993); Humaniści, heretycy, inkwizytorzy: studia z dziejów kultury XVI i XVII wieku (2006).

(1939–2000)
Philosopher, translator, poet and painter. Graduated from the University of Warsaw where he worked afterwards. His main areas of interests where structuralism, hermeneutics and metaphysics. He wrote essays on (inter alia) Blondel,Descartes, Levinas, Leibniz, Sartre and Ricoeur. He translated Merleau-Ponty, The Prose of the World; Paul Ricoeur, Existentialism and Hermeneutics, Ortega y Gassset; The Dehumanization of Arts and Other Essays, The Rebellion of The Masses and Other Sociological Papers.

(Born in 1945)
Philosopher and diplomat, served as an ambassador in the Kingdom of the Netherlands (1998–2002). She wrote a monograph titled Adam Mickiewicz and romantic philosophy of history in Collège de France.

(1945–2015)
Historian of ideas. She worked for the ‘Archive’ since the mid 60-ties as an assistant of professor Jan Garewicz, at that time secretary of the editorial board. Since 1969 she has been working for IFiS PAN. During the 80-ties she worked as a journal secretary. She is an author of the Lucyferyczne sny Micińskiego (1969) and Spadkobiercy Króla Ducha (1976), she published many articles on Polish philosophy, particularly of romantic and modern period.

(1907-1958)
Philosopher and historian of philosophy, one of the founding fathers of the Warsaw School of the History of Ideas. He specialized in the philosophy of Hegel. Major publications: Koncepcje filozoficzne mesjanistów polskich w połowie XIX wieku (1955); Hegel (1961); Faszyzm a tradycja europejska (2014).

(born in 1946)
graduated from Polish studies and philosophy at the University of Warsaw. Since 1974 he has been working in the Philosophical Department at UW. His work was dedicated mainly to the history of modern philosophy. Selected works: Maurycy Mochnacki: studium romantycznej świadomości (1982); Idea “filozofii narodowej” w polskiej myśli dziewiętnastego wieku (1997).

(born in 1940)
Critic, publicist and essayist. Graduated from Polish studies at the University of Warsaw. He received his PhD on the basis of his dissertation on Stanisław Brzozowski. Currently works as a professor at the Institute of the Polish Culture at the University of Warsaw. He authored many books and articles from the history of Polish literature, philosophy, cultural studies and cultural anthropology. Selected publications: Stanisław Brzozowski – kształtowanie myśli krytycznej (1976); Etos lewicy: esej o narodzinach kulturalizmu polskiego (1990); Przedwiośnie czy potop: studium postaw polskich w XX wieku (1997).

Archive of the History of Philosophy and Social Thought

“Archive of the History of Philosophy and Social Thought” has been coming out unceasingly since 1957 in the Institute of Philosophy and Sociology of the Polish Academy of Sciences. It specializes in the history of philosophy, history of ideas (the journal originated in the tradition of the Warsaw School of the History of Ideas) and history of social thought. The journal was founded by Leszek Kołakowski, Jan Garewicz and Bronisław Baczko and has been the oldest continuously released philosophical journal in Poland.

Since its inception in the „Archive of the History of Philosophy and Social Thought” more than 700 scientific papers were published. Original articles were submitted by such distinguished scholars as Bronisław Baczko, Zygmunt Bauman, Stanisław Borzym, Izydora Dąmbska, Tadeusz Gadacz, Jan Garewicz, Helmut Holzhey, Leszek Kołakowski, Tadeusz Kroński, Zbigniew Kuderowicz, Ludwig Landgrebe, Stefan Morawski, Zbigniew Ogonowski, Jan Patoca, Otto Pöggeler, Krzysztof Pomian, Gottfried Schramm, Marek Siemek, Barbara Skarga, Jerzy Szacki, Lech Szczucki, Karol Tarnowski, Władysław Tatarkiewicz, Józef Tischner, Karol Toeplitz, Andrzej Walicki. First printings and reissues of the classics of the Polish philosophy and social thought came out in the journal, among others portions of text by Cieszkowski, Czartoryski, Elzenberg, Kamieński, Kołłątaj, Massonius, Potocki, Struve, Szaniawski, Trentowski, Twardowski, Witkiewicz. Translations of the world-famous classics of philosophy were also published, including works by Ockham, Marks, Husserl, Diderot, Leibniz and Cassirer, in conjunction with many quality and pioneering studies on the history of philosophy, with the special emphasis given, what is quite understandable, to the philosophy and social thought originating in Poland.

„Archive of the History of Philosophy and Social Thought” is one of the most prestigious and most condign philosophical journal in Poland. It is the largest Polish source of knowledge on the history of ideas, ideologies and social thought. 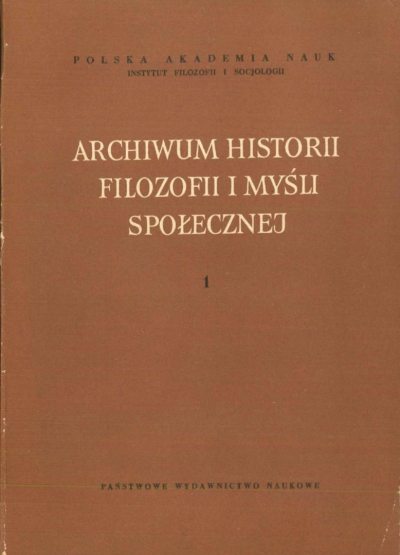 Readers who hold in their hands the first issue of the Archive of the History of Philosophy and Social Thought deserve a few words of explanation.

„Archive of the History of Philosophy and Social Thought” will publish both original sources and dissertations, monographies, reports, detailed content analyses, etc. „Archive…” would be coming out as continuous and non-periodical notebook comprising of 15 spreadsheets which would be released more or less within half-year intervals. As a part of “Archive…” edition, a special series dedicated to the history of the Medieval philosophy is being currently prepared.